Covered Exposure: A Muslim psychotherapist reflects on the day she revealed her religious identity to the world Sabrina N’Diaye is more than a colleague and cherished friend, she is my sister. We have both long understood the power of our relationship. I am a White Modern Orthodox Jew and she is a Black Muslim woman. As much as we honor and respect the ways in which we may be different, we are much more focused on noticing and celebrating the many common denominators in our personal, professional, and spiritual lives. We both hold dear the values of family, ethical clinical practice, compassion, love and respect for all humanity, the need to be in service of others, believing in the love and guidance of a higher power, and the need to participate in helping to heal the world. Sabrina is, among many other things, a master teacher. I can’t think of anyone more qualified and more compassionate to write about, and lead a workshop on, peace building and embracing diversity in others. I encourage you to read her eloquent blog post below and to sign up for her workshop!

We met every Tuesday — to sew under the leadership of master tailor, Bonnie Allen. They were all retired, mostly white women, living in the warm bubble of San Francisco Bay Area privilege. I was a new mom with a 2-year-old and a newborn, who had decided to get my “hustle on” by learning to sew. They embraced my much younger, much Blacker, slightly displaced Harlem girl part into their fashionista family. Our bonds grew stronger each week, in the safety of ribbons, bows, thread, and laughter.

A year later, while visiting the city of my birth, our world was rocked during the 9/11 attack on the World Trade Center. When I returned to California, my sewing circle ladies showered me with loving support. They had been trying to reach me when I was in New York, and were genuinely concerned about my safety. Despite our collective worry and grief, we settled back into our weekly routine of creativity and connection. Bonnie told us that sewing would get us through all of the powerless moments in our lives. And we believed her.

A few months later, our President began his campaign of revenge against our “enemies”. I had stopped watching the news, so that I could be more present for my daughters without engaging with them from a place of fear.

In the midst of sharing one of my creations to the group, Frannie made the pronouncement that would permanently alter the energy and safety of my precious sewing circle — “We have to kill them”.

One by one, each of my “sisters” chimed in with their statement of allegiance. “Yes, that’s the only way”. Bonnie and I were the only women in the room who remained silent in the exchange. My head was rapidly expanding from the shock. My heart ached from the pain of betrayal. Were they actually talking about war? Did they think it was OK? Did they know that as a Muslim, that I felt a direct connection to the political rhetoric of our President? No, of course they didn’t know. In that moment, they perceived me as one of them. Although I was the only Black person in the room, I was still an American. Race was irrelevant in the face of a common enemy — the Muslims.

I left our previously-safe circle in a daze, and picked up my daughters from another Muslim friend’s home. I had no idea how I would respond, or whether I even wanted to be around them ever again. I prayed for an answer and pleaded to Allah — “What do I do? What do I say”?

Later that week, I went to jummah, the weekly Muslim prayer service. There, I received the answer — “Speak your language to those women. Say it with presence. Do not deny them your love”.

The following week, I showed up in sewing class, with my head covered. Up to that moment, outside of my daily prayer ritual, I had never considered covering my head. I had never equated the scarf with spirituality, and often questioned whether it was a religious requirement. In the midst of questioning the hijab, I also knew that I needed to show up as visibly Muslim to my classmates.

No one noticed–not a single one of them. Frannie, lead Sewing Circle Warmonger, looked at me and called me, “Sabrina the Beautiful”. “Oh my”, I thought, “this was going to be more challenging than I had planned.”

I wore my scarf every week for the next four weeks. Finally, while dressed in full African regalia, one of Frannie’s chief supporters looked up at me and asked whether I was growing my hair out (I had cut my hair a few months prior to 9/11). She assumed that I was in that in-between phase that women experience after a bad haircut.

“No…I am not growing my hair back. I am wearing this scarf because I am a Muslim…and just like those Muslim women in Iraq, I want my children to live. I want to live. And I want to live in peace”.

For the first time in my life, I had a visceral understanding of the phrase, “You could hear a pin drop.” The silence in the room was deafening for them. And enlivening for the peacemaker in me.

“My people are there too”.

Without speaking another word, I continued to create two dresses for my African-American Muslim daughters, who loved Barbie, Dora the Explorer, and life in their middle-class home.

I never entered that space again without my scarf. Over time, I would begin to wear it more often, with more conviction about the statement that I was making. I was keenly aware that I was called to serve as a bridge for all of my communities. It also became a living symbol of my submission to One God, and a reminder that there was a power greater than me

Later, when I returned to the work force, I questioned whether my scarf would be positively received in a professional setting. In the wee hours of the holiest time of the day (3 am), I prayed for guidance — “Is this what I am supposed to do?” Am I supposed to leave this scarf on permanently? Despite my hesitance, I received the answer that I did not want to hear — “Yes…. you must continue to be a bridge….”

Today, I a run a wellness center and a private psychotherapy practice. I teach self-care, forgiveness and spirituality across the country. When my youngest graduates from high school next year, I will expand my work to a global audience. I live the teachings of my Sufi Master, a holy man, healer, and peacemaker from Jerusalem, who taught us to eliminate the idea of separation. 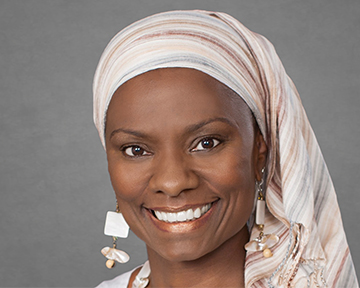 Sabrina N’Diaye, PhD is a faculty member for The Ferentz Institute. She is an integrative psychotherapist and founder of the Heart Nest Wellness Center in Catonsville, Maryland where she lovingly serves women, couples, and other healers. She also provides therapeutic guidance for addictions professionals, recovering addicts and the people who love them. Her approach to healing is a blend of wisdom, science, and ancient spiritual practices.
Join Sabrina when she presents “Therapists as Peacebuilders: Using Your Gifts for Global Impact,” (6 Diversity CEUs) Friday, September 28 from 8:45 am to 4 pm at The Ferentz Institute. Participate in a unforgettable journey of self-reflection, re-direction, and renewed mission. Learn more here.>>

2 thoughts on "Covered Exposure: A Muslim psychotherapist reflects on the day she revealed her religious identity to the world"

« The Impact of Internet Gaming Disorders: A Full Blown Addiction
When Clients are Traumatized by Clergy Sexual Abuse »